All Czech Rivers Flow to Germany 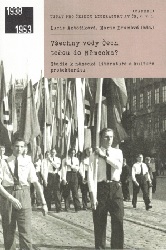 Our team member Marie Brunová has published, in cooperation with Lucie Antošíková, a collective monograph of eight authors from different countries who dealt with German literature and culture during the Protectorate of Bohemia and Moravia. The studies analyze Nazi cultural policy, German-language publishing houses, prominent (Hans Watzlik and K. H. Strobl) and less prominent authors sympathetic to Nazism, as well as the exiled works of German-language authors from Czechoslovakia and the responses to the occupation of Prague in literature, including Weil’s novel Mendelssohn is on the Roof.