One Biography, Multiple Places: The Life and Work of Shmuel Hugo Bergmann Between Prague and Jerusalem (1883–1975) 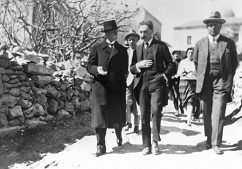 The Centre for the Studies of Holocaust and Jewish Literature is proud to announce the planned Conference on Hugo Bergmann with the title: One Biography, Multiple Places: The Life and Work of Shmuel Hugo Bergmann Between Prague and Jerusalem (1883–1975).

The Conference has been postponed due to the covid situation from May 4-5, 2021 and September 31st – October 1st, 2021 to November 3-5, 2021. The planned event will take place as a two-day conference at Charles University in Prague. Some 15-20 speakers will be invited to present their work in several panels of 90 minutes each.

The conference will bring together scholars from various parts of Europe and Israel who are currently studying different aspects of the multiple activities and thought of Shmuel Hugo Bergmann (Prague 1883 — Jerusalem 1975). It will also offer a venue to establish a transnational network to discuss how to stimulate further research on Bergmann and to enhance the knowledge of his unique contribution to twentieth-century philosophy, religion, politics, and Jewish thought.

The conference will address the multiple aspects of Shmuel Hugo Bergmann’s political, scholarly, and cultural activities. Originally from Prague, where in the first two decades of the 20th century he took part in the Jewish-cultural renaissance of the local German-speaking community,

Shmuel Hugo Bergmann moved to Palestine in 1920, where he assumed an influential role within the Jewish yishuv. He soon became a leading institutional figure associated with the development both of the Jewish National Library (of which he was the first director) and the Hebrew University (where he served as the first rector). At the same time, in light of his active advocacy of bi-nationalism and Arab-Israeli dialogue, and by virtue of his participation in various other political and labour organizations, Bergmann emerged as an important point of reference for left-wing Israeli discourse.

In Prague Bergmann studied philosophy with Anton Marty, a member of the Brentano School, and was influenced by the philosophy of Bernard Bolzano, to whom he dedicated his first monography. After graduation Bergmann worked as a librarian in the Charles University Library in Prague between 1906 and 1919. In Prague, Bergmann was an active member of the cultural and philosophical Salon of Berta Fanta (his mother-in-law), along with other Jewish intellectuals of his generation including Felix Weltsch, Max Brod, Albert Einstein, and Franz Kafka. Bergmann also counted among the leaders of the Bar Kochba movement, an association for Jewish Students at Charles University that through the help of Martin Buber contributed to the cultural renewal of Western-European Jewry at the beginning of the 20th century. Bergmann served as the chair of Bar Kochba in 1903 and in that year played also an important role in coordinating the activity of all Jewish students’ organizations belonging to the Austrian Empire.

Immediately after the first world war, Bergmann first served in the delegation representing Czechoslovak Jewry at the Paris Peace Conference and then moved to London, where he worked as an employee at the Educational Department of the World Zionist Organization. Later on, in May 1920 Bergmann emigrated with his family to Palestine and settled in Jerusalem where he was appointed the first director of the Jewish National and University Library (1920–1935). From 1928 on Bergmann lectured in modern philosophy at the newly established Hebrew University and in 1935 he was nominated full professor in the Department of Philosophy. In the same year, he was elected the first rector of the Hebrew University (1935–1938). During his office, Bergmann contributed greatly to the enhancement of the University’s stature and helped to determine the direction of its academic activity. During the visit of T. G. Masaryk, the first Czechoslovak President in Palestine in 1927, Bergmann became his guide. Immediately after World War II, Bergmann came to Prague and organized in cooperation with the Prague Jewish Museum, the transport of valuable Hebrew books that were collected by the Nazis in Theresienstadt to Palestine.

Bergmann soon became a leading philosopher and cultural figure in Israel and in the Jewish world as a whole; he was responsible for the translations of German philosophy into Hebrew, participated in the national public debate, was a founding member of the Israeli Academy of Sciences and was twice granted the Israel prize (in 1954 for his work in humanities, and in 1974 for his special contribution to society and the State of Israel). Besides his interest in philosophy, mathematics and natural sciences, Bergmann also showed great interest in religion, mysticism, and western esotericism. His influences included Rudolf Steiner’s anthroposophy, Franz Rosenzweig, Martin Buber, and Sri Aurobindo.

Starting from the late 1920s, Bergmann became one of the leading intellectual voices in the contemporary pre-state and later Israeli political debate, always in favour of a peaceful solution and advocating a separation between religion and the state, cautioning his readers against abandoning Judaism altogether for the sake of a secular Zionism devoid of spirituality. In particular, from the late 1920s, Bergmann was active (together with Gershom Scholem, Judah Leon Magnes, Martin  Buber and others) in the Brit Shalom movement, which called for a dual-national state and advocated peaceful coexistence of Jews and Arabs in Israel/Palestine.

Notwithstanding the importance and impact of Bergmann as a philosopher, theologian, political thinker and academic leader, relatively little research was dedicated to him. In recent years, there is growing interest amongst scholars in various aspects of his life and thought. Hence, we think it is time to organize the first international conference dedicated to the life and thought of Bergmann, and later, to publish a volume of collected articles based on the lectures presented at the conference. We hope that this conference will contribute to the study of the political and intellectual activities of Bergmann, who did not receive as yet the scholarly attention they deserve.